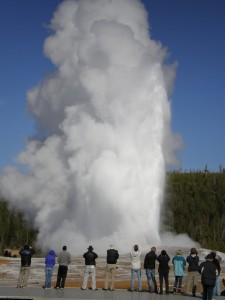 Old Faithful goes off once every 2-4 hours, and we arrived literally the second it started.

We drove up to Yellowstone National Park today, wanting to get there before most of the roads close on November 7th for winter road maintenance. I have to admit, this was all Louis’s idea. I had heard of Old Faithful, and once did a hiking trip in Montana, so I thought I had some notion of what Yellowstone would be like. I had no idea. 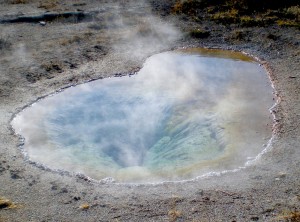 Yellowstone National Park covers approximately 3500 square miles in Wyoming (mostly), and is centered on the Yellowstone caldera, which is an active supervolcano (a volcano capable of ejecting more than 240 cubic miles of rock). The most recent major eruption was 640 thousand years ago, but a smaller eruption 160 thousand years ago formed a caldera that surrounds West Thumb of Yellowstone Lake. 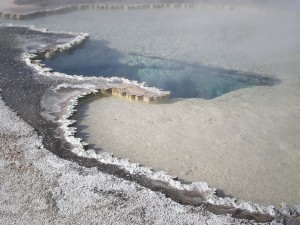 Some awesome silica shelves (or are they bacterial?)

The Yellowstone Plateau sits at about 8,000 feet atop a body of magma that is responsible for the park’s 300 geysers and 10,000 other geothermal features (hot springs, mud pots, and fumaroles). For the curious, wikipedia has an article on how geysers guise (which is a verb Louis made up). 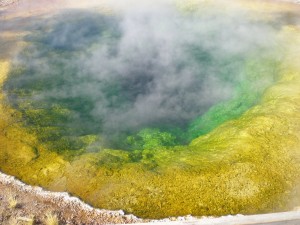 I believe the colored rings correspond to different bacteria inhabiting their favorite temperatures. The central blue, however, is the color of pure water.

The brief version is that surface water percolates down as much as 6,000 feet underground, where it reaches hot rocks heated by magma. The water is under such high pressure from all the water and rocks above, that even though it may be 400 degrees, it does not boil. Instead, the hot water rises to the top and shoots up through narrow passages (“plumbing”) as it explodes into a boil near the surface. 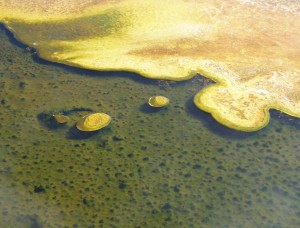 Many of the hot springs are brimming with beautiful cerulean water, bubbling gently and steaming, inviting passersby on a chilly fall day to hop in and soak. Not a good idea! Water temperatures may be close to the boiling point. The springs and geysers are home to many species of thermophiles and extremophiles (bacteria that can thrive in very acidic, alkali or sulphuric waters), creating bacterial mats of many different colors. 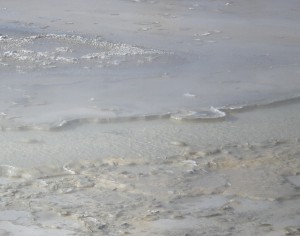 Speaking of sulfer, if you ever get a face full of hot spring steam, the stench of rotten eggs (hydrogen sulfide) can be overpowering.

And that’s just the geology aspect. Tune in later when I post more pictures of bison and deer and canyons and waterfalls! 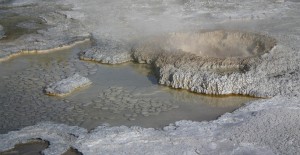 Must have been some kind of thermal convection that formed all of those perfectly rounded stones? 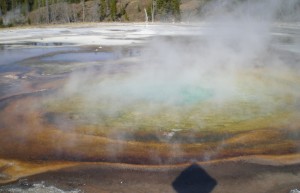 The red outer ring is most likely iron deposits with some iron-loving bacteria.

This entry was posted in Day Hikes, Geology, Travel, Wyoming. Bookmark the permalink.