Emily is in an early intervention program which is a federally funded program that kids can take advantage of if they were premature or otherwise have developmental issues. At first I was ambivalent about this. It’s hard for me to write this down. Having Emily in a program made it impossible for me to ignore the fact that she was premature, that her birth was traumatic, that yes, all that really did happen. She’s the perfect little human. Our perfect daughter. Anyone who has met her has seen her incredible strength, her bright eyes and brilliant smile. Anyone who has spent more than a few days with her has seen how every day she seems to learn new things. In just the past two weeks she’s suddenly grabbing things with more coordination, starting to push up (straighten her arms) while on her tummy, and her vocabulary has exploded. Oh yeah, plus she’s making almost unbelievable progress in learning how to nap in her crib. She is in a word, amazing. That’s all I ever want to think about. 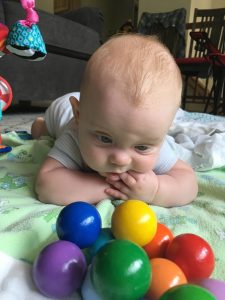 Sept 10th – This is going to require some deep contemplation. Maybe a nap first.

Louis has done a much better job at “worrying” about the consequences of her history, the hypoxia event specifically. It’s strange to say “a better job at worrying”, right? One of the great coping strategies that I’ve developed over my lifetime, in order to stay sane and get things done, is not letting myself worry about anything unless there’s an obvious reason to. And with Emily there certainly hasn’t been an obvious reason (well ok, there’s the feeding issue, but it’s easy to pin that on reflux plus possibly some scar tissue in her esophagus that’s making swallowing difficult). Except then there’s this: we’re first time parents, we have zero medical training, and even less than zero specifically pediatric medical training. We have no idea what to expect in terms of the developmental timeline or behavior of an infant. Sure, we’d be able to detect if something were obviously wrong. But barring that, it would be so easy to fumble along, letting Emily progress at her own pace, not wondering where she’s falling on the bell curve.

And seriously, who cares about bell curves? That was my guiding philosophy. Children are all so different, and the range of “normal” is incredibly varied. Lord knows I’m familiar with both extremes of the bell curve in my own life! So of course, of course Emily is perfect, no matter how quickly she learns a given task. But I figured something out yesterday during our latest visit with our wonderful occupational therapist. I’d read a facebook post earlier in the day where a mother was concerned that her baby was doing the army crawl instead of the hand-and-knees crawl. Most of the responses were along the lines of “Hey, my kid never crawled, he just went straight to walking, and he’s fine now!” but then an occupational therapist commented saying “Well, actually, it is preferable that they learn to crawl properly, because the cross-body motion really helps their coordination and stability later on”. And it hit me that parents really are forced to do so much guesswork with their children. No one has time to earn seven advanced degrees in childhood development while raising a kid. And for the most part (the species has survived!) guesswork really is good enough. But knowledge is power. 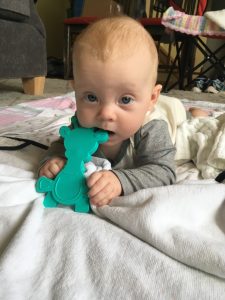 So I asked the OT how we can help Emily progress towards crawling, and she unloaded a pile of incredible strategies and tips, the product of thousands of dollars worth of education, and probably hundreds of thousands of dollars worth of scientific research. For free. So my thinking has switched completely, and now I am so incredibly grateful that we have this opportunity to give Emily every advantage she can get, to potentially open even more doors for her. Not that those doors would be locked forever otherwise, but if we can make her future a little bit easier, a little bit more filled with possibility? Oh my goodness! I’m suddenly overflowing with enthusiasm for this whole early intervention thing. So as usual, Louis is lightyears ahead of me in the instinctual knowledge department, but hey, I get there eventually!

I can still comfort myself imagining that Emily suffered no ill effects of her birth. I can still put that in her past and look only towards the future. I think that’s a reasonable thing to do. But now I can dive in with my whole heart and search the ends of the Earth for any “extra help” we can give our daughter. Plus, learning about how brains develop is just fascinating. Win win!

This entry was posted in Uncategorized. Bookmark the permalink.