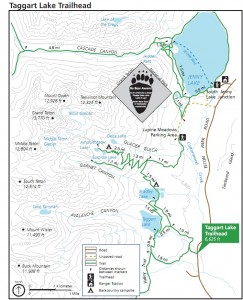 Another epic day! And this one I was able to share with Louis, for twice the fun, and at least three times the insanity. This was the hardest hike Louis has done since we began our hiking adventures, and for me the intensity was compounded by still being sore from yesterday. 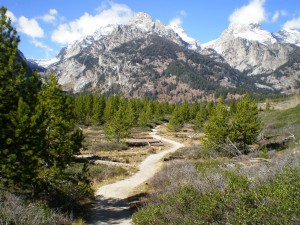 starting out towards Taggart Lake

We’re both in much better shape than when we started our hiking adventures, but by the end of the day there was much daydreaming about dinner and sleep and scalding hot showers. Specifically, I was craving marshmallows (actually I’ve been craving them for weeks, which makes no sense!) and Louis was craving Elk steak. We have yet to eat either of these things, I am sad to report. 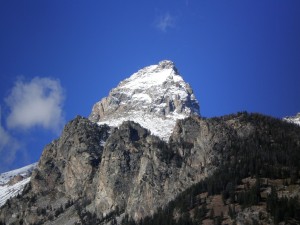 I don't honestly know which peak this is. Might be Grand Teton herself, but don't quote me on that.

So. We drove 20 or so minutes into Grand Teton National Park, and hit the Taggart Lake trailhead around noon-thirty. Both of us have recently become experts at sleeping in, which is not ideal for getting in long hiking days, but at this point neither of us are any good for more than about 7 hours of hiking anyway, so it hasn’t really interfered. I’m sure I’ll snap out of this strange schedule soon enough. 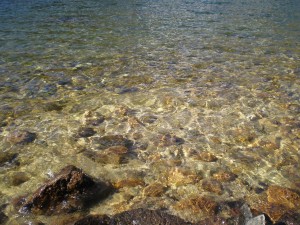 We hiked up to Bradley Lake, which was a beautiful clear greenish lake. Initially we’d planned on a half-day of hiking, but when we got to the lake in only 50 minutes, we decided to push on towards Surprise Lake. And boy was that an awesome decision! Such a beautiful lake, it’s a shame we didn’t really have time to laze around and soak it all in. 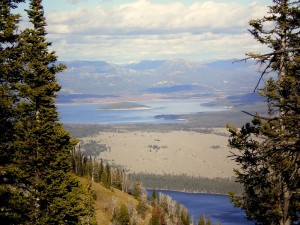 Jenny Lake and some other lake. Methinks I went a little crazy tweaking the colors here.

The most exciting part of the day for me was hiking up beyond the snow line. Also, we saw two grouses! That was a new bird for me, and we were fortunate that the couple that we’d been passing multiple times all day were able to identify it. 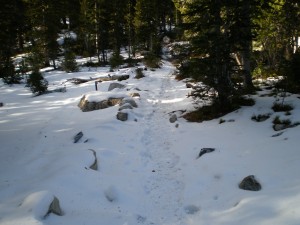 By the time we made it back to the car, there were already at least a couple dozen stars in the sky, and just barely enough light to navigate the trail. (We did have headlamps, but I forbade Louis from turning his on unless it became absolutely necessary. I am stubborn, and just wanted to see if we could make it.) 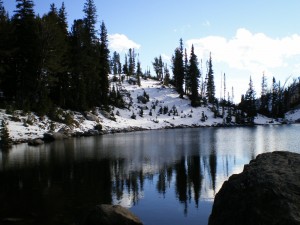 We had a bit of an adventure trying to find a place in Jackson to eat dinner. It turns out that about 80% of the restaurants in the main drag are all super fancy foodie attractions, featuring exotic entrees in the $20-$40 range. Too rich for my blood! But there are plenty of more casual places with reasonable prices. Bubba’s BBQ has a massive salad bar (absolutely massive!) and some very tasty meat. And Betty Rock Cafe has some of the best pizza we’ve had in a long time. 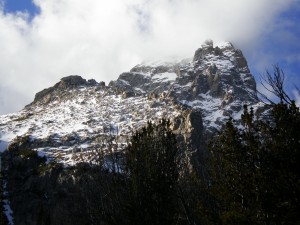 I am loving the Grand Teton peaks, but it saddens me that they are inaccessible without climbing gear. 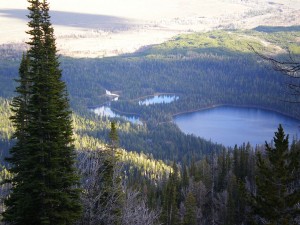 We've still got a long way to go down, and the shadows are getting long. 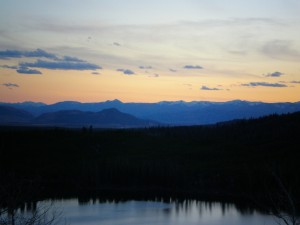 We still have another mile. Will we make it before dark?!

This entry was posted in Day Hikes, Wyoming. Bookmark the permalink.